CPR009: The Same Mistakes, by The Desks 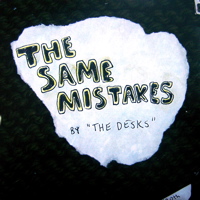 Cover art/craft by Jeff Edwards
For the 20th project, you're supposed to come up with new songs! To write & record a song on one day of the month. To set a deadline & create from nothing!

In contrast, "The Same Mistakes" is a rehash of old material. These are songs I* made for The 20th project, in past months. Most of these songs have already appeared on a "20th" CD, but anyway, this is a different product.

This CD-R is for trade, not for sale. I've made CDs in the past and just given them away for free. But then people from bands I admire go "hey do you want to trade CDs!" and I'm like "sure" even though I've given the same CD to other people for nothing. That's crazy & unfair.

If you'd like a copy - whether you've recorded a real album or just sung a song into your computer's built-in microphone and burnt it to disc - please send me an email at jeff@cabinetpin.com and we'll arrange to swap CDs.

(I'm also happy to swap for other stuff you've made, eg zines)

ALSO BY The Desks